Honestly.  Some people just need to grow up.
Posted by Hecate at 12:10 AM 1 comment:

It was zero glorious degrees outside this morning with a wind chill of minus-eighteen.  Currently the temperature has made it all the way up to ONE ABOVE.

"Average" for this time of year is supposedly 36 high and 16 low.

If the Global keeps Warming at this rate, the glaciers will have returned by February.
Posted by Hecate at 12:26 PM No comments:

Can anyone identify the rifle in these photos?  Click to embiggen. 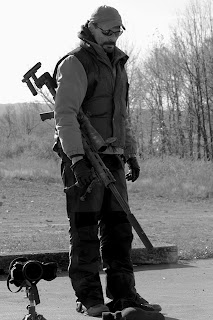 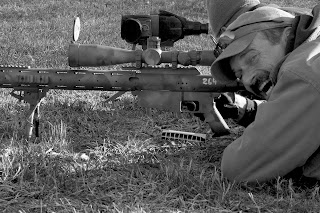 Several active and former military/sniper/Camp-Perry friends have weighed in with their opinions, but unfortunately no two of them seem to agree.

Thanks!
Posted by Hecate at 6:59 PM No comments:

Blargh.
Posted by Hecate at 2:04 AM No comments:

My current workplace forbids even a Leatherman because they consider it a ZOMG SCARY WEAPON.

But every desk comes pre-equipped with one of these:

After all, it's not like anyone could ever hurt you with scissors, right?

The ongoing depredations of the Infernal Eternal Internal Revenue Service pretty much make Buy A Gun Day a fiscal impossibility for me (gotta keep those entitlement slags happy so they'll vote for Democrats again). But that didn't mean I couldn't get a new Magnum on April 15, 2011. 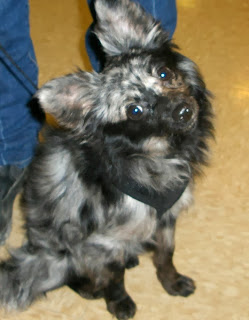 He's three years old now and weighs all of seven pounds.  His littermates are named Colt and Remington, so this was pretty much fated to be. His name is appropriate, since he’s the dog version of a .357 scandium J-frame: small and lightweight but packing quite a wallop.

After a lifetime of German Shepherds, Greyhounds, and a hundred-plus-pound Scottish Deerhound who stood three feet tall at the shoulder, a dog this small is like an alien life form.

I’m thoroughly accustomed to Greyhounds who learned to open the refrigerator and help themselves. I could deal with a Deerhound who was so tall on his hind legs that I was not physically capable of holding food out of his reach. I figured a dog this small couldn't get into much trouble, right?

This little monster goes places and does things my cats never dreamed of. Like getting in my kitchen sink by running straight up the front of the cabinet like a military working dog scaling an eight-foot barricade. That's why he's kenneled for his own protection whenever I can't devote my full, undivided attention to keeping him from killing himself.

My other three dogs are seventy-to-ninety-pound retired racing Greyhounds, to whom a seven-pound fuzzball* looks mighty like prey. They will never share floor space with him. Without exception there are never less than two physical barriers between them.  That doesn't make them bad, it just makes them Greyhounds. It's not their fault they have exactly the characteristics for which they've been bred for 4,000 years.

Magnum has such a powerful presence that I can't think of him as a tiny dog.  He's a very big dog in a conveniently-sized package.  He has none of the deformities and neuroses that make so many toy-breed dogs utterly loathsome.  My vets just love him, although every time they see him they still say they can't believe I have a little dog.

Posted by Hecate at 2:48 PM No comments:

Labels: Life With Critters, Other Critters

Years ago, I stumbled across an interesting knife mentioned on a gun forum. Called the HideAwayKnife, it was a small fixed-blade designed to be pretty much undroppable. The unique design made it perfectly suited to both defensive and utility purposes.

I always carried a folder (or three) and figured I could handle them effectively if I needed to use them for last-ditch personal protection. But as is so often the case, a bit of force-on-force taught me how foolish that was. There just isn't enough fine motor control to spare.

I ordered a HideAway, along with a training drone and SouthNarc's great training DVD. I know better than to think a DVD alone can prepare anyone to fight for their life, so I loaned it to an instructor (retired SEAL) I've worked with extensively in armed and unarmed technique. He was impressed, and helped me develop better competency with the little knives. 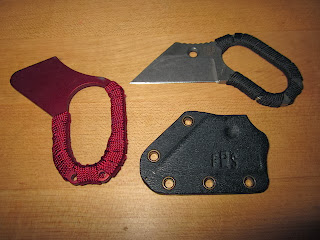 Only about an inch and a half long, they fall well within most jurisdictions' knife carry blade length limits. Some areas ban all fixed blades regardless of length. As with the confusing array of gun laws on the books, it is our responsibility to research what is and is not allowed where we live and travel. Nebraska, for example, defines a knife with a blade over 3.5" in length as a weapon, but then throws in "any other dangerous instrument capable of inflicting cutting, stabbing, or tearing wounds" for good measure. This state also defines a "deadly weapon" as "any firearm, knife, bludgeon, or other device, instrument, material, or substance, whether animate or inanimate, which in the manner it is used or intended to be used is capable of producing death or serious bodily injury." Animate or inanimate? Well, I did have a cat with an attitude years ago who qualified.


But getting back on topic, I don't want a bad guy getting any closer to me than absolutely necessary and a knife is absolutely an up-close-and-personal weapon. I also understand that I will not be able to set the parameters of any true defensive encounter. Having highly-concealable options for the worst-case scenario can only be a good thing.

HideAways are like potato chips, though. You can't have just one.
Posted by Hecate at 12:53 PM No comments:

As Allen Saunders less-famously said, life is what happens to you while you're busy making other plans. Despite being repeatedly steamrolled by life over these past couple of years, I have quite a lot for which to be thankful.

After being unemployed twice over a less-than-six-month period, I now have a job I truly enjoy. It's insanely busy, but I thrive in that kind of work environment.  An unexpected crisis in the life of someone very close to me resulted in the dissolution of a twenty-year relationship, but a new friendship may slowly be growing.

Thanks to a convergence of judgement errors, a new boarder introduced strangles to the farm where I board my horses that went undetected until every horse was exposed.  Mine are coming down with it one after another, but seem so far to be making uneventful recoveries.

Beyond the realm of the personal, it seems that Dear Leader's hubris may finally be collapsing under its own weight as even long-term loyalists distance themselves.  Harry Reid's Nuclear Option will come back to bite the Demonrats Democrats if voters pay attention and they lose their Senate majority.

Despite more horrific more horrific mass murders gleefully exploited by the lamestream media and would-be gun-banners, the line has mostly been held against those who would deprive us of our rights.  And with the fall of Illinois, now all fifty states have some mechanism, however flawed, for lawful concealed carry.

We do, however, need to always remember that we are responsible for keeping it that way.  The price of freedom and prosperity is eternal vigilance and plain old hard work.  Never give up and never stop fighting the good  fight.

Happy Thanksgiving.
Posted by Hecate at 11:32 PM No comments:

Most people who hear about my ongoing battles with folks who want my property agree with my refusal to be intimidated. But every so often, somebody says, "Why don't you just let them have it and go somewhere else to live?"

Why indeed? Wouldn't it be easier to just give them what they want and run away? That's the way to guarantee I'll be safe, right?

Whether by threat of harm in the dark parking lot or threat of harm by harassment and intimidation, taking somebody else's rightful property is the same. It makes no difference in principle that the landgrabbers write a check to validate their taking. They are still forcing somebody else to give up something he or she wishes to keep.

That's the problem. Neither the robber nor the landgrabber has any respect for "this is mine, you can't have it."

We're told by our betters the Authorities that we shouldn't resist a criminal who "just" wants our "stuff." It's only "stuff" and can easily be replaced, right?

I'll wager the privileged elitists who say that have never been unemployed. They don't understand that "stuff" can be finite, and losing "stuff" can have serious adverse effects on someone's life.

The elites wonder why there's no reduction in crime after they restrict effective self-defense and indoctrinate the masses to cooperate with criminals. They just made crime easier, that's why. More than once, a Stand Your Ground bill died in the Nebraska legislature thanks to a Judiciary Committee infested with anti-defense, pro-criminal (excuse me, pro-disadvantaged-youth-vicitmized-by-society-who-just-want-jobs) quasi-functionaries who prefer helpless subjects to independent citizens.


Running and hiding never ends. They always find you again. Being submissive draws victimizers the way decomp draws flies.
Posted by Hecate at 10:47 PM No comments: