Nebraska: They Eat Horses, Don't They?

Nebraska Senator Tyson Larson wants to slaughter horses for human consumption. His 2011 bill LB305 would set up a state meat inspection system, designed as an end run around the federal defunding of horsemeat inspection in 2005. Since all horsemeat sold for human consumption must be inspected, that effectively ended horse slaughter in the United States.

The meat inspection bill is bad enough, but with his companion bill LB306 effectively criminalizing horse rescue in this state, Senator Larson would assure his pet slaughter project a supply of horses with nowhere else to go. Nobody would prosecute a homeless shelter for being full, but Nebraska Senator Larson wants to do exactly that to horse rescues in this state. His justification?

"Basically, [LB306] would mandate that humane societies and horse rescue operations would have to accept a horse if one was presented to them, or they would face a class four misdemeanor. I'm giving them an alternative. If they don't want us to process horses, what are we supposed to do?"

Senator Larson claims to be a horseman, but has been quoted as saying the horse breeders in Nebraska who were producing horses exclusively for slaughter were placed under a hardship when the horse slaughter plant in North Platte closed. Funny, that sounds like horse slaughter actually ENCOURAGES breeding MORE horses, when overpopulation is used as its justification. You can't have it both ways.

Another lie about slaughter is that it is a humane end for old, lame, and sick horses. But those kinds of horses will not pass inspection for the foreign markets that buy the meat. Only healthy, sound horses are acceptable for slaughter for human consumption. As far as killing the others for "zoo meat," transporting and stockpiling the old, sick, and lame for slaughter is horrific. I've held horses I'd had for many years, who had given me 110% in all things, while they died, both naturally and by veterinary euthanasia. That's humane. Slaughter is not.
When I lived in Illinois, I saw the Cavel plant and a pet-food facility that slaughtered horses very up close and personal, from the inside. I accompanied two different friends who had been convinced by their boarding stable owners that slaughter at Cavel was the best end for their unsound horses. Back then, horse owners could pay for a "private" kill, outside of normal production hours. My visits to the pet-food facility came when I was drafted by another friend to ride along as moral support when he was hired to haul a truckload of crippled livery horses for disposal. After comparing my direct observations with the Canadian Horse Defence Coalition's videos located here, I can unequivocally state that NOTHING has changed in horse slaughter over more than thirty years.

By making horse destruction profitable, slaughter promotes abuse, neglect, and overbreeding. Slaughter also promotes horse theft. Before the horse slaughter plant in North Platte, Nebraska, was shut down, horse theft was surprisingly common in this state. Law enforcement never seemed to take the thefts seriously. Several horses were stolen from a boarding facility where a friend kept her horse. The horses stolen were family pleasure horses, unregistered but priceless to their owners. Their "monetary" value was too low to get any real attention from the sheriff. I found a man on my own property once eyeballing my retired 16.3hh Thoroughbred mare who had been a successful 3-day eventer in our misspent youths. When I demanded he explain his presence, he told me my horse was worth a lot of money for meat. I told him to leave while he still could.

Horse slaughter plants are a management nightmare. No commercial slaughter equipment exists that is made for horses. Horses are bigger, stronger, faster, and far more reactive than cattle. Their smaller heads with longer, more flexible necks make instant kills by gunshot or captive bolt far more difficult with a high percentage of failures. Pound for pound, horses have twice as much blood in their bodies as cattle. A proposed plant in Montana would have required an entire new wastewater treatment plant for a kill as low as 200 to 400 horses a week.

When I first moved to Iowa, the only job I could get as a woman with an electrical engineering/computer science degree was as a USDA/APHIS brucellosis inspector in a hog slaughtering plant. I worked in the "stick pit" so I got to observe the killing process and what happened immediately before in great detail. I saw frequent and blatant abuse of hogs before and during the kill by employees who treated it as a source of amusement. There was nobody I could report it to who would do anything. When outside inspectors did come in, employees were notified in advance and everything was done perfectly while those inspectors were on site. As soon as they left, it was back to business as usual.
A veterinarian friend working in an Omaha-area beef plant lost his job when he tried to report and stop cattle abuse by employees. According to Dr. Temple Grandin, only about 20% of animal slaughter facilities operate within acceptable humane guidelines. The rest "slip into bad practices" with a full 10% intentionally treating animals cruelly.

I'm sure Senator Larson could watch the CHDC videos and insist it can't happen here. I've been inside slaughter plants, and I don't believe that for a minute. Neither should you.

And I am once again reminded of a very old poem, author unknown:

Look back at our struggle for freedom,
Trace our present day's strength to its source,
And you'll find man's pathway to glory
Is strewn with the bones of the horse. 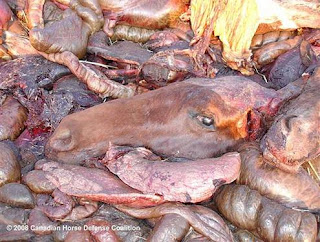 "Tone Down The Political Rhetoric"

I was born and raised in Chicago (don't hold that against me), so I'm all too familiar with Chicago's unique form of politics. President Obama is doing everything in his power to take that sordid corruption to the national level.
If any further proof was needed, we have his appointment of Bill Daley as his new Chief of Staff. Bill Daley as in brother of Richard M. Daley, King Richard the Second, corrupt mayor of Chicago since 1989. As in son of Richard J. Daley, King Richard the First, 21-year mayor of Chicago and undisputed boss of the city's far-reaching Democratic Machine.
But don't take it from me . . .
Posted by Hecate at 12:35 PM 3 comments:

Labels: Politics, Want Vaseline With That?

A student at Millard South High School in Omaha shot the principal and assistant principal today. The shooter was the son of an Omaha Police Department detective. He was suspended this morning and left the campus to return with a gun, thought to be his father's service weapon. When he was later found in his car by police, he was already dead by his own hand after posting a suicide message on Facebook.

Ever notice how these things never happened back in the days before zero tolerance, weaponized pencils, and nobody's-allowed-to-fail?

UPDATE 2: Looks like the school security officer hid behind his desk. It accomplishes nothing if your sheepdog is a sheep.
Posted by Hecate at 5:52 PM 2 comments:

Don't Bet Your Life On The Police

They were AT THE SCENE and this felon-in-possession still managed to kill his girlfriend and try to kill himself.

Say again, both individuals were alive and (physically, obviously not psychologically) undamaged when the police arrived. While the police were there, Mitchel Hadan shot and killed Rita Eckhout and then shot himself in the back of the head.

And why was this career-criminal deleted-expletive out on the street?
Don't die waiting for somebody else to save your sorry @$$.
Posted by Hecate at 5:45 AM No comments: