That's the good news. Ordering a custom-built pistol from Wilson Combat, or any of the other upper-end gunsmiths, means you have plenty of lead time to come up with all that money. Think preemptive layaway. The bad news?

Another month to go, at least.

Outstanding In Their Field 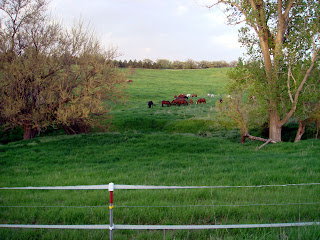 The black mare to the left of the group, the bay gelding next to her facing right, and the two grays to the upper right are four of my Thoroughbreds. Milton The EvilPony™ wasn't visible in the photo.

Only two of my current six equines are rideable. Milton is just too small, but I've been known to threaten him with the prospect of buying a pony cart and harness. The others have chronic injuries that don't prevent them from being happy pasture ornaments but make it inhumane to expect them to work under saddle. They were already messed up when I bought them, and I did so with full knowledge that I'd never be able to "use" them.

Had I not bought them, they would very likely have gone to slaughter. I am beyond disgusted by people who can breed horses, show them, race them, ride them, and then throw them away like a broken golf club when those demands prove more than their bodies can withstand.

Maybe its just encroaching senility, but I find I enjoy paying out hundreds of dollars every month to keep useless horses happy more than all the show ribbons and trophies from my misspent youth.

* Want to make a small fortune in horses? Start out with a large one.
Posted by Hecate at 6:11 PM 3 comments:

My weapon is for the protection of my life and the lives of others. That is its sole purpose. It does not confer rights, responsibilities or authority greater than that of other citizens. It merely allows me to protect life.

I will acquire superior training with my weapon. It is not the weapon that saves lives, but my effective use of the weapon. I will ensure my training is sound, my knowledge is current, and my mind is prepared.

I will know, understand, and obey all laws and ordinances concerning my weapon no matter where I happen to be. Failure to do so harms all who seek to legally carry an effective means of self protection.

I will know and follow the Four Rules of safe gun handling. I am a member of a growing community that must foster and teach safe and responsible gun handling if the community is to survive.
© Xavier 2008 Used by permission

When You Actually Address The PROBLEM . . .

You actually get results.

David Kennedy is an anthropologist at the John Jay College of Criminal Justice at the City University of New York. He developed a method of violence interdiction introduced as the Boston Gun Project, aka the Boston Miracle, that cut homicides in that city by 60%. In Cincinnati, gun-related homicides spiked in 2006 to 89, more than double the annual average, since 1991, of 43. People there looked to Kennedy for help.

Kennedy's research team found what he calls typical trends: They identified 69 distinct street groups, comprising about 1,000 people. Of the 89 homicides, these 1,000 people – less than half a per cent of the city's population – were connected to more than 75 per cent of them.

For any politicians in the audience, let me repeat this. Less than one half of one percent of the population of Cincinnati, Ohio, was responsible for 75% of its homicides.

So how can passing more restrictions on guns that only affect law-abiding citizens accomplish anything?

It can't. About gun bans and similar laws, David Kennedy says, "For people desperately searching for a solution, it seems like it makes sense. What they don't understand is that there are better tools that don't require law to implement, and are practically cookbook and off-the-shelf."

The first year Cincinnati's Initiative to Reduce Violence was in effect, homicides were cut in half.

Without passing a single gun law.
Posted by Hecate at 7:18 PM 1 comment:

The Philadelphia Daily News is just a treasure trove of interesting information these days.

The politicians who wail about how eeeeevil guns cause crime somehow never seem to mention that the folks actually using guns to commit crimes are no strangers to the criminal justice system. The sane, law-abiding citizen who one day snaps and goes on a killing spree with his/her legally owned guns exists only in the fevered imaginations of the hoplophobes.
Posted by Hecate at 6:50 PM No comments:

A Provocative Thought Experiment On Guns

This is about Philadelphia, where the appropriately-named Mayor Nutter insists on passing and enforcing local restrictions against law-abiding gun owners that violate Pennsylvania's state preemption statute.

Almost all the firearms used in these shootings were obtained, possessed and carried illegally by those who perpetrated the shootings. If, as is constantly claimed, we MUST DO SOMETHING to stop this violence, then why not ban African-American residents of the city from owning handguns?

The answer is that that is patently unfair and discriminatory. To judge an entire group as a problem and punish all members of that group, irrespective of their individual actions, is unconscionable.

Yet, it's deemed perfectly acceptable to discriminate against one particular group - gun owners.

Let's just tell the truth. The instant Mayor Nutter gets the right to pass gun laws for Philly, it will become a practical impossibility to own a handgun or any other weapon the city deems "inappropriate."

I've done nothing wrong, but my rights are to be removed step-by-step because others - entirely outside the law - are using guns feloniously. How is this any less outrageous a suggestion than that black people shouldn't be allowed to have guns?

Couldn't have said it any better.
Posted by Hecate at 4:50 PM 1 comment:

It's not like the 911 operator would hang up on you and not dispatch the police or anything like that.

The college student who called was later found murdered in her apartment. The Public Safety Communications Director doesn't feel his department has anything to apologize for. 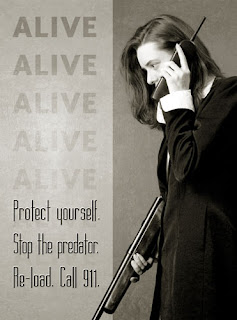 Worth Repeating In This Election Year

"How a politician stands on the Second Amendment tells you how he or she views you as an individual... as a trustworthy and productive citizen, or as part of an unruly crowd that needs to be lorded over, controlled, supervised, and taken care of." - Dr. Suzanna Gratia Hupp, former Texas State Representative