Now THIS is my idea of a Vice-President! 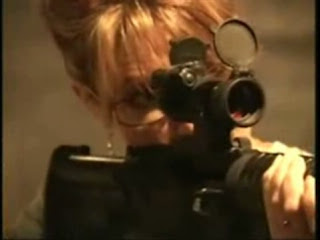 Just when I thought the future of this country was seriously sunk, John McCain selected Alaska Governor Sarah Palin as his running mate.

The nightly ad-nauseam TV coverage of the Democratic National Convention is doing wonders for my backlog of odd jobs around the house and unread books. That's because I'd rather clean gunk out of the sink trap than watch it.

The litany of entitlements they are offering the Democratic faithful needs only a chorus chanting "GIMME! GIMME! GIMME!" in the background. This country has been called the Land of Opportunity, the Land of the Free, not the Land of The Free Lunch. In America, I can have anything I am willing to work for and earn. I can also turn my life into a world-class Charlie Foxtrot if I so choose by make bad decisions. In other words, I am free to succeed and I am free to fail, according to the choices I make in life. And I own the consequences of my successes and failures.

In other words, had I been stupid and/or greedy enough to buy a house I couldn't afford, it would be my responsibility to clean up the mess, not the .gov's.

That's not what the speakers at the DNC seem to believe. In the finest tradition of the Democratic Party, they promise foreclosure bailouts and universal health care without explaining just how they will pay for such largesse.

Oh, that's right, they won't have to pay for them. We will.

As a side note, a Cuban immigrant recently wrote a letter to his local newspaper remembering where he's heard similar promises of hope and change before.

Another of the highlights(?) was announcing Joe Biden as Obama's running mate. In case anyone out there who owns guns has been under a rock for the past year or so, Obama getting elected would be very, very bad for gun owners. I therefore offer the following as a reminder of what Biden thinks of us:

Graham Showell, 32, from Birmingham, and Bruce Wright, 30, from Essex, England, are doing something very courageous in the middle of nanny-state Britain. They have put up a website called Britain Needs Guns: The Best Solution To Rising Violent Crime.

They offer pages of annotated facts debunking common gun myths in Britain. When reading about comparative rates of violent crime in the US and UK, I realized I had no idea things over there were THAT bad.

Anyone who thinks disarming law-abiding citizens reduces or eliminates crime needs to read their entire site.
Posted by Hecate at 4:55 PM No comments:

David Hineline, a friend from the Nebraska CCW forum and FFL from South Sioux City, came down for the event with LOTS of cool toys. 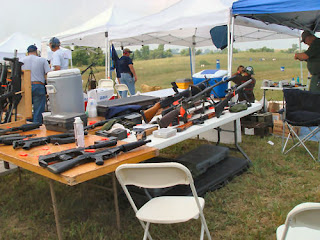 I tried his MP5SD, but found the stock length to be a bit of a reach. Yes, I really am that short and dumpy. If I follow the genetic predisposition of my family's female side, I'll eventually end up looking like R2D2 in drag. 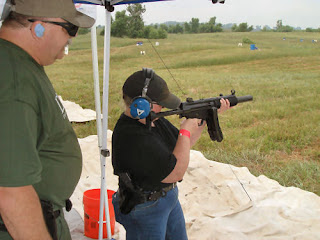 The select-fire M16 carbine in 9mm had an adjustable stock, which worked out much better. 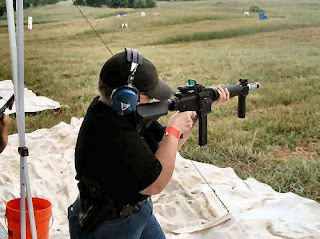 There were many historical weapons there. I missed the chance to photograph a gentleman in Revolutionary War period costume. These two participants had uniforms and equipment from the Viet Nam era. 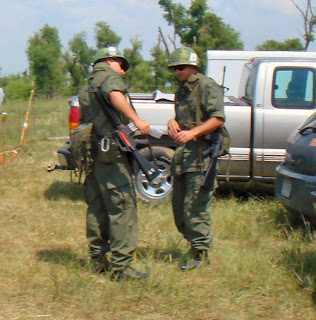 There is no such thing as an ex-Marine. 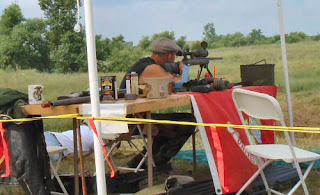 Fifty-caliber single-shot rifle. There was so much to see, and everyone was so busy, that I'm afraid I didn't get the particulars on all the guns there. 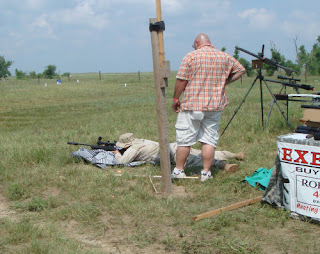 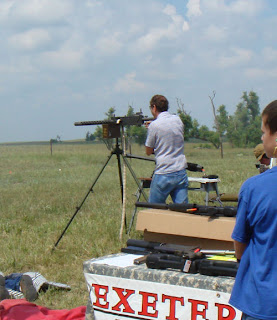 Exploding Tannerite has got to be the ultimate in reactive targets. 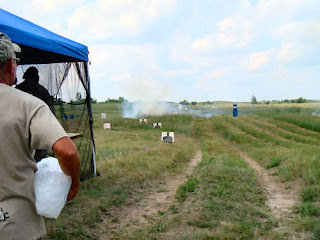 I have to comment on the children I saw at this event. There were lots of them, from about four years old on up. Without exception, they were all well-behaved and well spoken. They displayed maturity, self-discipline, and responsibility. I have seen this over and over at shooting events.

This young man attentively listened to the instructions he was given for safely shooting the .50 rifle while his friend looked on from behind the line. 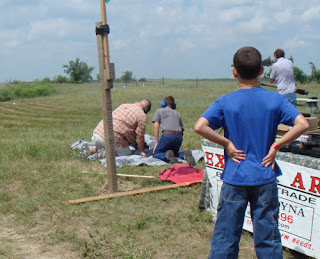 His friend wisely supplemented his earplugs during the shot. 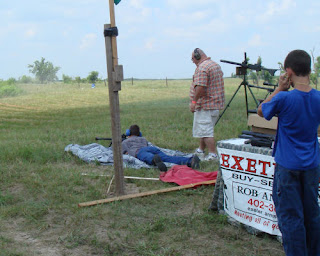 The nanny-statists would have us believe guns are a bad influence on children. But responsible gun owners raise their children to be responsible individuals. Seeing these admirable young people gives me hope not only for the future of gun ownership in this country but for the future of the country itself.
Posted by Hecate at 6:11 PM 1 comment:

More Than Just Swimming And Gymnastics

There's a lot more to the Olympics than the events you see every night on the news. Fortunately for those of us who enjoy things like Shooting and Equestrian, NBC has a huge amount of video available for viewing online.

By the way, the Equestrian events are the only ones where men and women compete together against each other. Having a thousand-pound horse as a partner really levels the playing field.
Posted by Hecate at 5:07 PM No comments:

Range Report For My New Wilson

Keep your pink revolvers. To me, a ladies' gun looks like this: 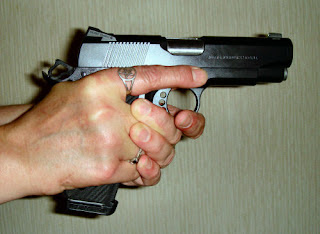 Yep, it's my new Wilson Combat. The gun fits like it was made for me. Oh, wait, it was. 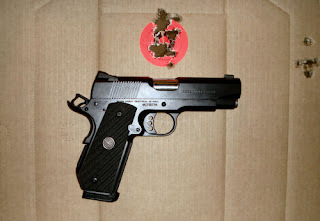 The first shots on the above target were eight rounds of 165 gr +P Pow'RBall, followed by 32 rounds of Blazer Brass 230 gr FMJ. Of the hardball, two friends -- both instructors, one an ERU operator -- each fired eight rounds. The group off to the right are check shots. I shot the rest. Distances were three, five, and seven yards. 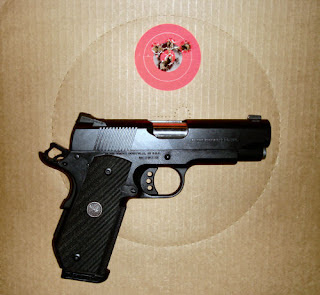 The second target was all mine, a five-shot group, slow fire, offhand, Blazer Brass 230 gr FMJ, at ten yards.

A target I didn't keep was one full magazine dumped as fast as I could fire, point-shooting high-COM on an IDPA target at five yards. I could still cover the group with my hand.

Another friend put a full eight-round magazine into the head-shot A zone on an IPSC target as fast as he could pull the trigger at five yards.

I ordered both slim Diamondwood grips and standard-thickness G10's. On all of my other 1911-pattern guns, the slim grips work better with my hands. But on this one, the aggressive G10 grips are perfect. The slight difference they make for carry concealability is more than offset by the Ed Brown bobtail. This gun is easier to conceal than my CCO-size Kimber.