Just when I thought my opinion of Ted Kennedy couldn't get any lower, William The Coroner had to remind us of this.

ETA: Looks like William The Coroner's post is gone, for whatever reason. That's okay. Plenty of others are pointing out the same things.
Posted by Hecate at 7:09 PM 7 comments:

Don't Protect Yourself, Rely On The Police

Two Marin County, California, sheriff's deputies watched from 50 feet away while a man killed two people with a shotgun on the Richmond-San Rafael Bridge last week.

Not only did these armed and on-duty police officers not intervene with a murder happening right in front of them, they allowed the murderer to get in his car and drive away.

We always say that when seconds count, the police are only minutes away. But even if they're already at the scene, there's no guarantee they will take action. Of course, in California, some folks feel it's perfectly acceptable for the police to stand by and watch while a criminal commits murder.

Because "Nobody other than the intended targets were hurt."

See, they aren't actual people or anything, they're just "targets." If the police had, like, done their jobs, innocent bystanders could have been injured.

I would imagine the "intended targets" might disagree with that, as would their friends and families. Or even the comment-writer himself, should he ever end up looking down the barrel of a criminal's shotgun.

When violence strikes, make sure you have the tools, the skills, and the will to save yourself. Because waiting for the Only Ones to save you could take the rest of your life.

ETA: Looks like the Oakland Tribune pulled ol' Bud's comment. Did we just see a crumb of journalistic integrity?

ETA2: And now the crass comment is back! I knew that had to be just an illusion of journalistic integrity. It is, after all, the Bay Area. 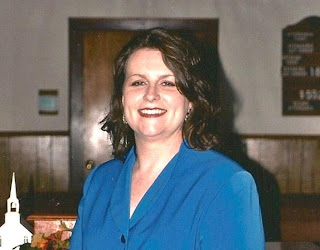 Kristi Cornwell, 38, has been missing since about 9:00 pm on August 11. She disappeared near the same area where Meredith Emerson was abducted in 2008.

Cornwell's boyfriend, Douglas Davis, apparently attends a Cobb County church, according to a daily e-mailed report from Macland Baptist Church. According to the church e-mail, Davis was talking to Cornwell when she was approached.

"She told him a car was stopping near her and then started screaming, 'Don't take me,'" according to the church bulletin.

She was a former probation officer who "took firearms classes, taught self-defense and whizzed down the Dragon’s Tail – one of the most popular roads for bikers in the country – on her motorcycle. Yet she never had any problems."

The park area where Meredith Emerson was taken prohibits usable firearms. From the information available, Kristi Cornwell appears to have been taken along a road that should be legal for concealed carry, if she had a permit and was carrying a gun.

It's so easy to fall into thinking a well-known area is safe. A gun can be awkward to carry all the time. I know, because unless I'm in an unavoidable defenseless-victim zone, I carry my bobtail Commander 1911 every waking hour. As Greg Perry says, "Your gun was made to be comforting. Your gun was never made to be comfortable."

And if you're walking alone along an empty road after dark and a car stops near you, you should be increasing your distance from it while getting an inconspicuous firing grip on your handgun.

Carry all the time. Because "BANG-BANG, BANG" is much more likely to prevent a kidnapping than "Don't take me."
Posted by Hecate at 6:46 AM 2 comments:

The 2009 Heritage of Freedom Jeff Wells Memorial Fun & Freedom Shoot in Kearney, Nebraska, on August 14-16 was, if you'll pardon the pun, an absolute blast. 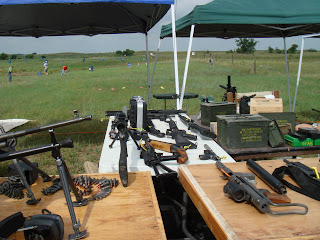 There was a full complement of folks who brought lots of cool toys for spectators to learn about and shoot. 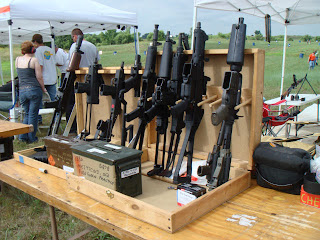 Most guns could be "rented" for the cost of the ammo used. The price of admission for spectators was $20 if unarmed, $10 if open-carrying (legal in Nebraska without any permit), and $5 if you had your CHP. 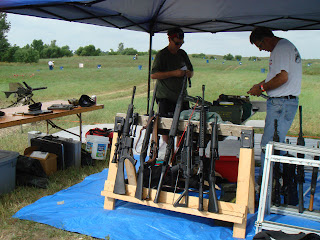 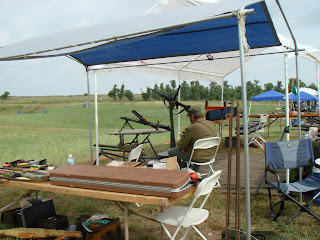 Last year I came as a spectator. This year I got a shooting position of my own. Okay, my table wasn't nearly as impressive as some. 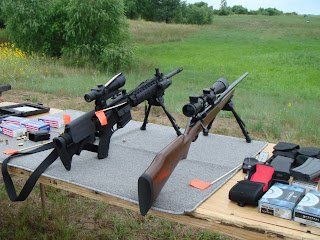 The AR is my Smith & Wesson M&P15T with bipod, ACOG, and a new snap-on cheek rest that does a wonderful job of letting me get a good cheek weld with the optic mounted on the carry handle. The other rifle is a Savage .270 Win with their Accu-Trigger that I borrowed from a friend. 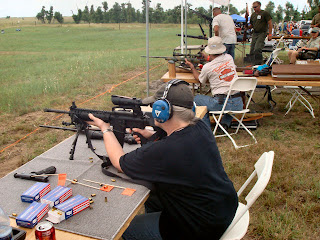 This was the first chance I've had to get my AR out on a really long range. I had zeroed my ACOG for 200 indoors and was surprised the math had held up. Once I found out at what distances the targets were really set, I got my holdover straightened out and was getting good hits out to 400+ yards with both the AR and the bolt-action. 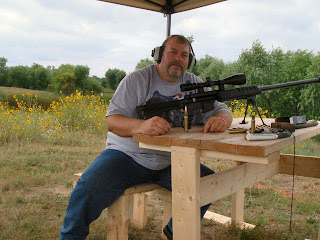 Nebraska's own Gunscribe, aka Tim Tyrrell Sr., with his BOHICA Arms .50 BMG upper on a DPMS AR-15 lower. 'Scribe is one of the original Second Amendment movers-and-shakers in this area, and laid the groundwork for what has now become the Nebraska Firearms Owners Association. 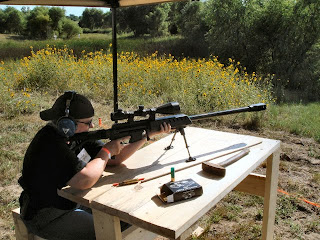 Yes, I shot Gunscribe's .50 BMG. Between that and a few hundred other rifle rounds I fired, I have a bruise on my shoulder today.

The thing that really blew my mind was people coming up to me and telling me they actually read my blog. I was honored to hear their compliments, and I humbly thank them -- and you others out there -- for your support.

I'm looking forward to next year's Fun And Freedom shoot already. It's tentatively scheduled for August 13-15 of 2010. Friday evening is for arrival and early setup, Saturday is an all-day affair, and Sunday finishes up by noon. So mark your calendar, come on out and play. That Tannerite isn't going to blow itself up.
Posted by Hecate at 9:15 PM 4 comments:

I Should Know Better

I now know better than to call my horses from a distance when they're the only ones in the pasture. It's only a ten acre field, so if I'm smart, I'll just walk all the way out to them, right?

With less, um, creative horses, sure. With mine, well, not so much.

I couldn't see them when I entered the pasture, so I started to walk from hilltop to hilltop. No horses. I didn't want a repeat of the previous day's excitement, so I didn't call them. Just kept walking and looking.

Still no horses. The barn owner always lets me know if he moves them, so I must be in the right place.

I walked the whole ten acres without seeing a single horse. Finally I decided to give up and call the barn owner in case he moved them and forgot to tell me. I headed back toward the gate to get my cell phone out of the car.

And as I got there, I turned in time to see all six horses. Following me. Far enough back that I wouldn't have seen them if they stayed at the bottoms of the hills I climbed.

The day was windy enough that I couldn't hear them walking through the grass. I didn't call them, so they didn't come any closer. It was hot enough that they probably didn't feel sufficiently motivated to climb all those hills.

Can't win for losing.
Posted by Hecate at 9:04 AM No comments:

Horsey Heart Attack Of The Day

So I go out to the barn to check on Sarge's progress, and all six of my critters are out by themselves in the small (ten acre) pasture. I get to hike out and find them.

Okay, fine. I traipse out to the top of the first hill and see them grazing on top of the second hill, about 100 yards away. So I call them. The heads pop up out of the grass, and they head my way.
At a dead run. All six abreast, shoulder to shoulder, like a freakin' offensive line. And as they get closer, they aren't slowing down.

Now my horses always come when I call them. But usually they're out with the rest of the herd and scattered around so they don't all reach me at once.

Or get carried away with the whole yee-haw-stampede mentality that horses can get into when running in a group.

I know better than to move when large animals are approaching at high speed. They can see me, and they have already decided where and how they are going to accommodate my presence. Horses are extremely careful not to run over people. Accidentally.

Knowing all of this does not mitigate the pucker factor in the least.

Yes, I stood my ground, and yes, they stopped. By skidding to a halt practically toe-to-toe and showering me with dirt and grass. Jolly fun, according to them.

From now on, I will walk all the way out to them as long as they're by themselves so they can bond with the new kid, and leave the long-distance recalls for when they're out with the herd again.

Or maybe push my luck and try to get some video. It was pretty spectacular.
Posted by Hecate at 6:00 AM 6 comments:

The Machine Guns Of August

Just a friendly reminder for the 2009 Heritage of Freedom Jeff Wells Memorial Fun & Freedom Shoot this weekend in Kearney, Nebraska.

Putty In My Hands

Cando Theraputty, to be exact.

I'm always looking for ways to improve my shooting. My snubby convinced me that while my hands are strong, they're not strong enough. Fifty rounds through that little thing is still downright unpleasant. And the Speer Gold Dot Short Barrel +P ammo I use for carry? Ouch.

I've tried those hand strengtheners with springs and the rubber balls without much success. A physical therapist friend suggested I try the putty, so I ordered a set of four-ounce containers of six different resistances from extra-extra soft to extra firm. A four-ounce blob is just right for a small woman's hand, and I can work through all six stages in ascending order in about twenty minutes while watching TV.

Noticeable improvement was very quick. I still think I suck, but my standards for suckage have become much higher.
Posted by Hecate at 10:51 PM 2 comments:

Just for the heck of it I ran one of those "Carbon Footprint Calculators" off the web. It said I need 17 trees to offset my carbon emissions. 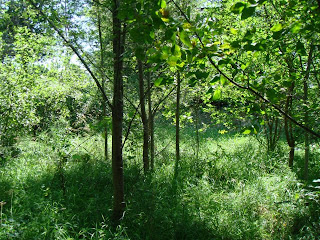 What, you thought I was kidding when I said I lived in the woods?
Posted by Hecate at 3:28 PM 3 comments: