At Least SOMEBODY Gets It

Ian Colburn is an alumnus of Northern Illinois University, where a sociopathic graduate student killed five people, wounded sixteen more, and then killed himself before police could arrive. I refuse to add the criminal to the death toll or mention his name.

Ian Colburn says he's a comedian, but there's nothing funny about this press release he issued after the events at his alma mater:

"I am drained from these shootings, the feeling of helplessness they bring, the fear they create which hangs over every campus like a dark cloud, and the net cast out for causes which always comes back empty of solutions. Instead, it is filled only with speculation, blaming everything from video games to guns to the lack of legally concealed firearms to mental illness to Godlessness to the Internet. Shooters share three traits: they are unhappy, they blame others for their unhappiness, and they don't know how to express or deal with their problems within socially acceptable norms. It's not just shootings among youth that's on the rise; it's drug use, alcoholism and violence in general. More and more, our children are growing up in a culture of irresponsibility and blame (as an educator I have witnessed this first- hand), and are being taught that their community is responsible for their unhappiness. They are not learning how to function properly in their community or how to deal with their shortcomings. Whatever we do, little ears are listening, little eyes watching, and little minds forming. If you lose the Presidential election, the other guy cheated; 26,000 Patriots fans are contesting the Super Bowl, blaming inaccurate timekeeping for the loss; when schools punish student misbehavior, parents intervene by threatening to sue and schools renege; the most influential Presidential candidate plagiarizes and shrugs it off; simple games like tag are being outlawed because some students aren't as skilled as others. The erroneous message is that you don't have to learn to function within your community; rather, the community will change to cater to your needs and whims. In an increasingly complex world we are robbing our children of the tools they need to cope. The battles I fought on the playground and in school built my character, enabled me to deal with my shortcomings, and prepared me to face the realities of life and disappointment, leading to my successes. It is our culture to where we need to turn our studies to find a solution to shootings. An exceptional response strategy is not the solution. NIU taught us that; they are to be commended on their strategy and quick response but even that proved ineffective to stop bloodshed. I don't know if this statement will make a difference or circulate; I only know that I had to make it."

Personal responsibility has disappeared from our society. Entitlement, narcissism, and instant gratification have taken its place. When those who have never learned to cope have problems, they are medicated into compliance. For a while.

That GPA twenty-year anniversary really got me to thinking. If I count my time with REGAP before GPA, it's been more like twenty-five years in Greyhounds.

I adopted my first ex-racer in 1983. Duffy came from Sodrac Park, and years later I'd look at him and say, "Just LOOK what you started." They're habit-forming, you see. We call it "chipping," because as with potato chips, you can't have just one.

Twenty years. Hundreds of dogs going through my home. I used to mark each dog's dish with his or her name on a piece of white electrical tape. When the dog was placed, I'd remove the tape and stick it on the wall over the sink in the food prep area. The whole wall was eventually covered with those name tapes.

Twenty years of getting more holiday cards from Greyhound adopters than family members and friends. Adoption follow-up calls like the sweet little old couple who told me after they got a Greyhound they couldn't walk around the house naked any more because of the cold nose at just the wrong height. Talk about TMI.

Twenty years of keeping every dog that nobody wanted for the rest of their lives. Some of them made it very clear why nobody wanted them. I kept them anyway, even if they weren't very pleasant to have around. They're why I'm the pet cemetery's single largest client.

Twenty years of hands that perpetually smelled like Clorox and old-style, cauterize-your-sinuses Adams Flea-Off Mist. I remember thinking whoever invented Advantage should get the Nobel Prize.

The dogs from the early years are all gone now, but others have taken their places in my life if never in my heart. To be honest, I even miss the obnoxious ones. I cherish every toothmark in my furniture and every indelible spot on my rugs. And I know full well that every time I get a phone call or e-mail telling me a Greyhound needs help RIGHT NOW for the next twenty years, I'm going to just keep doing it again and again . . .
Posted by Hecate at 5:19 PM No comments:

I happened to hit the Greyhound Pets of America main website last night, and saw that GPA was twenty years old last year. The site had a picture of the founding members who created the organization at a meeting in Boston back in 1987.

And there I was in that picture, standing on the right end of the group. 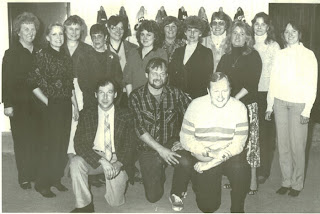 Another Hound Joins The Wild Hunt

The wind shakes the house in the darkness, branches lashing the windows. The Wild Hunt is running tonight. And tonight, the Hunt has one more hound in the race. 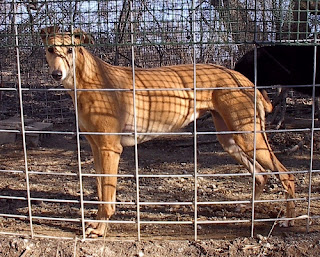 Gable Godiva
(Gable Dodge - Franks Scootem)
July 28, 1999 - January 24, 2008
Gable Godiva was a retired racing Greyhound. She was really too good on the track to be "petted out." Her last race at Corpus Christie was Grade A, and she won it box-to-wire. Harlyn and Janna Goebel, though, are committed to doing what's right for their dogs, so Godiva was placed in an adoptive home by Heart of Texas Greyhound Adoption.

Family circumstances changed, and they didn't want her any more, saying she was aggressive. Since she was no longer in Texas, I got the referral and found myself with another Greyhound. She turned out to have an extremely strong personality, and with a history of "aggression," I figured it was safest to keep her.
We all come from the Goddess
And to Her we shall return
Like a drop of rain
Flowing to the ocean
In my group of misfits and rejects, she took being an Alpha Bitch to a whole new level. She was my door guarder, sleeping next to the dog door so she could terrorize the other dogs as they came in the house. My three-foot-tall, hundred-plus-pound Scottish Deerhound is still afraid to come in by himself.

I ducked out the dog door once just to fix the rubber mat on the steps. Once out there, of course I got distracted, picking up poop and destroyed dog toys. When I stuck my head through the door to crawl back in, Godiva had forgotten I was outside.

I heard a roar -- not a bark, a roar -- and felt canine teeth on either side of my cheekbones. Fortunately, Godiva was paying attention by then, and realized her error before I needed a plastic surgeon.
Never the spirit was born
The spirit shall cease to be never
Never was time it was not
Ending and beginning are dreams
Birthless and deathless and changeless
Remains the spirit forever
Death has not touched you at all
Death though the house of you seems
When she came in limping on an icy day, I took her to the vet figuring she'd probably slipped and torqued something. Her radiographs were clean, so we thought it was a strained brachial plexus. But a week later it was worse.

New radiographs left no doubt. There was cancer present, and we knew amputation was necessary. Her lungs were still apparently clear, so she came home a tripod to wait until it was safe to start chemotherapy.

On January 24, she had an appointment for her first chemo treatment. But at 1:30 in the morning, she woke me in distress. I gave her a tramadol and stayed with her until the vet's office opened. I carried her to the car, because every time she tried to walk she would cry and fall down.

They radiographed her again. There was a new primary tumor in the distal radius of her only remaining front leg. Her lungs were full of metastases.
Do you know who I am, she said
I'm the one who taps you on the shoulder
When it's your time
Do not be afraid
I promise that she will awake
Tomorrow somewhere
Tomorrow somewhere
(Tori Amos, "The Beekeeper")
The only consolation I have about having to make The Decision is that when life is no longer possible, freeing them from that life is the last gift I can give them. So I held Godiva while she received the injection, saw her last breath, felt her last heartbeat. She is now buried at the pet cemetery with all of my others who have preceded her, dogs, cats, two amazing horses, and where I will eventually be buried.

My tradition sees all souls as the same, whether they choose to inhabit a human or a Greyhound on any given turn of the Wheel. We have all been here before, and we will be here again. Many times, we travel through our many lives in groups. Two of my current dogs have been with me before in other bodies. Others drop in from time to time, often during ritual, just for a visit. And when the wind howls at night, many of them run riot with the Wild Hunt.

So until we meet again . . .
I call the Wild Hunt
By Herne and Hecate
By horn and hound
By wind and storm
And wreck of winter
I call us home
(apologies to Laurell K. Hamilton, "Mistral's Kiss")
Posted by Hecate at 5:21 PM 2 comments:

Giving This Blogging Thing A Try

Everyone needs another chance to vent, right?

What kinds of things do I vent about?
Anyway, here goes nothin'.
Posted by Hecate at 4:53 PM No comments: