With due credit, and apologies, to Joe.

Not much has been happening on this blog because Real Life™ got in the way. I found myself suddenly and unexpectedly needing to find new employment.

In this economy for sure, that quickly becomes a more-than-full-time occupation in itself. Trolling the employment sites, applying for anything I was even remotely qualified for, calling those headhunters that hunted me in the past, e-mails, phone calls, and the absolute worst of all.

Did I mention how much I hate the term "overqualified?"

I'm also not too crazy right now about volunteer organizations that refuse to understand that they are not The Very Most Important Thing in their members' lives. Sorry, folks, but Being Able To Pay My Bills takes precedence.

I now have a much better job with a Global Corporation with significantly higher pay, more flexible hours, and the option (indeed requirement) to work from home at least part of the time.

And I have to get a passport.

Sure, the workload will be insane. Current staff there puts in 70+ hours a week. No problem, I've been doing that for 18 years in IT. But instead of being expected to cover everything from servers, routers, switches, firewalls, and applications to carrier circuits, outside agency issues, and user desktop troubleshooting, I will have one specific area to focus on. That in itself will feel like a vacation.

My first day will be November 2, unless they can push my paperwork through faster. They want to start me middle of this week if possible.

I really should thank the **multiple expletives deleted** agency I used to work for.
Posted by Hecate at 9:15 AM 13 comments:

Last month, Cabela's proactively notified their California ammunition customers that they would no longer be able to ship to them if AB962 was signed into law.

Governor Arnold "I made millions shooting guns in movies but you peasants shouldn't have any" Schwarzenegger did exactly that just before the veto deadline.

According to his statement, he actually believes this will reduce crime. Or at least he says so. If it does, it will pretty much be a first, since no other gun control legislation has ever done so. A far more frequent effect of restricting citizens' access to firearms is an increase in violent crime.

Just as every single other restriction has only resulted in criminals obtaining weapons through off-book channels, this will do the same with ammunition. They're criminals. That's what they do.

California will undoubtedly see some other effects that certain people there will consider good ones. Some gun owners will move to other states in disgust. Others will decide it's just too onerous to keep going and give up on owning guns. Gun-haters, gun-fearers, and gun-banners love anything that reduces the number of law-abiding gun owners.

Some who live there keep fighting the good fight.

The rest will bend over, grab their ankles, and submit to thumbprinting and registration. Until the next time another draconian law whittles away at the ranks.

Oh, sure, it could have been worse. The bill that was signed was previously amended to remove requirements for ammunution sellers to be licensed and restricting ammunition transfers to not more than fifty rounds a month.

It's easy to say this is California, what do you expect? But no matter where we live, every one of these worthless laws harms us all. Every one sets another dangerous precedent. And worst of all, when they don't accomplish anything, the idiots who wrote them are motivated to DO IT AGAIN, ONLY HARDER THIS TIME.
Posted by Hecate at 11:35 AM 6 comments:

Sarge is reaching the point in his training where he trusts me enough to give me the benefit of the doubt. I can present new things for him to learn, and because I haven't hurt him, his immediate reaction is calm curiosity instead of fear.

Today, I decided to try girthing him for the first time. With the scarring in his back, he might not be able to wear a girth comfortably. If so, he would be permanently retired at the ripe old age of three. I seriously doubt he'll ever be able to handle a saddle with the weight of a rider, but driving in harness might still be a possibility.

I used a training surcingle, first letting him look it over and then just laying it over his back. He thought that was okay, so I let down the off side, reached under him, and brought up the buckle end on his near side. Just holding against him was okay, too, so I buckled it on the longest hole.

No objection, so I took it up one notch, then another. The surcingle was girthed as snugly as if it was part of a driving harness. And Sarge's reaction to this? Yawn. 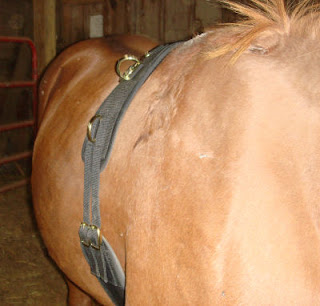 There was none of the excitement that used to happen back in the bad old days, when terrified horses were snubbed to posts as saddles were strapped in place. No bucking, no resistance, no pain, no fear. There was no halter, no rope, no physical restraint at all. And it took less than five minutes from start to finish.

After Sarge wandered around for a while looking bored by the whole thing, I figured why not introduce him to the round pen and longeing? After all, so far so good, and a chance to move out more would test how comfortable the surcingle really was for him.

So I put his halter on and led him out to the round pen. Once inside, I took his halter off to avoid any possibility he could catch it on the fence. Using a longe whip only to wiggle along his side as a suggestion to stay out on the circle instead of right next to me, he walked and trotted calmly in both directions for about ten minutes or so. Plenty of time for a first attempt.

Then we went back to the barn. I groomed him, told him he was wonderful, and turned him back out. Thus endeth the lesson.

Good horse training appears very boring, because nothing seems to be happening. A horse should walk off the very first time he wears a saddle the same as if it's the thousandth time. If anything more spectacular happens, it's my fault and not the horse's.

Slow is smooth, and smooth is fast. Sound familiar?
Posted by Hecate at 10:01 PM 1 comment:

The Federal Trade Commission is cracking down on product endorsements in blogs.

I write here from time to time about various items I have found useful. I place links to some companies, such as Wilson Combat and HideAwayKnife, in my blog sidebar because I use and like their products.

And I've bought and paid for every one of these items.

A company paying me to review their stuff? Please. First, you need to have, like, more than five readers for that to happen. Second, I don't do that.

A few companies have e-mailed me to post links, offering free or discounted merchandise in return, or a cut of any sales that come from my blog. I have never taken any of them up on their offers. I blog as a way to say things I want to say, not for commercial gain.

However, the FTC can choose to investigate me just because I post anything at all that might possibly imply I might possibly have some theoretical obscure relationship with an equipment manufacturer.

I love my Megan Magnum holster that I ordered, waited for, and paid for. Ditto my full custom built Wilson Combat 1911 based off their Elite Professional and my many HideAway knives. I wear Galco and Wilderness belts because they last and I like them, not because anyone paid me to.

I feed my horses Triple Crown Performance and Woody's Exacta Oats because I like their quality control and ingredients. I use an Ansur treeless saddle because I did a lot of research when I wanted to find something that wouldn't harm my horses' backs, and it has proven to be exactly that.

And not one of these companies has ever given me one red cent. Or any free products. Nothing. Nada. Zip.

I will continue to express my personal opinions about things I have bought and paid for myself.

Labels: Commentary, Want Vaseline With That?

Sarge Has A Girlfriend

The last time Sarge (and Milton The Bad Example for company) had to be separated from the herd for a while, a fat roan Quarter Horse mare moved in at the boarding farm. Since the barn owner wisely introduces newcomers gradually, he put her in with just Sarge and Milton at first. She started hanging around with Sarge, and quickly became thoroughly attached.

So now Sarge has a girlfriend, but he doesn't seem nearly as invested in the relationship as she is.

Yesterday when I went out to treat Sarge's scar, all the horses were out in the 50-acre pasture. I saw what looked like a chestnut-colored, Sarge-shaped blob off in the distance, so I called him. His head popped up, he whinnied, and came at a run. Fat Roan Mare initially followed him, but then stopped about fifty yards away.

I sprayed his withers with skin conditioner and treated his one spot of ringworm (love those childhood diseases) without having to halter him. He then chose to leave his herdmates and followed me all the way back to the barn by himself. Not "buddy sour" at all, no sir.

Fat Roan Mare kept calling him, but he ignored her and stayed with me. To reward him for following me back voluntarily, I made a big fuss over him, let him in the barn, and gave him some grain. Fat Roan Mare was still outside, pacing and yelling. He still completely ignored her tantrums, walking out of the barn like a gentleman when I opened the door. Then Sarge and Fat Roan Mare went back out to the pasture together.

That's what I love best about positive horse training, when they do the right things totally of their own volition, because they want to.

But I feel a little sorry for Fat Roan Mare's owners. They will probably get an unpleasant surprise one of these days when they try to take her away from her boyfriend. She sure is the clingy type.
Posted by Hecate at 8:50 AM 1 comment: