A friend is selling a restored Western-style sidesaddle, without a leaping pommel: 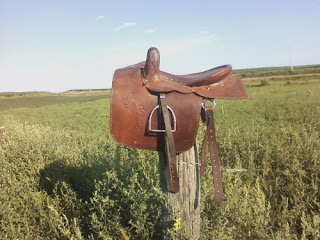 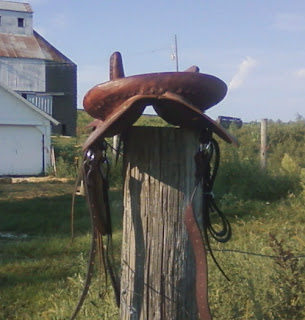 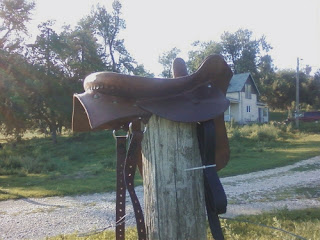 I was running errands last Saturday and had just left a specialty store in a small strip mall with my purchases.  A woman who looked, shall we say, out of place in that area approached me with some sob story about needing help.  She needed money, she needed to borrow (yeah, right) my cell phone, yada, yada, as she kept trying to get within arm's reach.  I maintained my distance, explaining politely but firmly that I could not help her.

Fortunately she finally got the message.  I then watched her go into the store I had just left, the only one in the vicinity with no customers inside, just a single late-teens-early-twenties female sales clerk with the situational awareness of a doorstop.

I pretended to have forgotten something and went back into the store.  The woman was regaling the young clerk with the same spiel as she edged closer to the open end of the counter.  I stood off to one side, where the woman could see I was watching her out of the corner of my eye.

Funny thing, she quickly left the store and was nowhere to be seen when I went out again to the parking lot.

Pay attention to that built-in hinky meter.
Posted by Hecate at 5:50 AM 3 comments:

Oh, This Would NEVER Be Abused

By our Benevolent Overlords:


How The New "Protecting Children" Bill Puts You At Risk
HR1981 forces ISPs to retain customer names, addresses, phone numbers, credit card numbers, bank account numbers, and dynamic IP addresses for eighteen months. The information would be available to police and attorneys upon request. Even civil litigants would be able to access this data.


"It is pedophilia that is illegal. But for the sake of harnessing hysteria to get a bill passed, clearly these particular Republicans find it convenient to conflate “pornographers” as pedophiles. Last time I checked in on the matter, pedophiles did not operate within the laws surrounding adult pornography."

Gee, kinda like criminals do not operate withing the laws surrounding guns.

Just as with guns, there are plenty of ways to track down pedophiles without keeping 18 months' worth of highly confidential data on every single internet user in the country.  As a professional network engineer, I've worked on many investigations ranging from employees behaving badly to kidnappings and serial killers.  Not one of those investigations was impeded by lack of this legislation, or would have been advanced by its presence.

HR1981 (1984 would have been a more appropriate bill number) happens to be sponsored by a Republican ostensibly against Teh Ebil Pr0n, but it could just as easily been crafted by Democrats against Tea Party Terrorists.  One can't help but wonder whether there's some wink-wink-nudge-nudge going on across the aisle with this one.

As with criminals vs. law-abiding gun owners, the percentage of pedophiles vs. legitimate internet users is microscopic.  There is absolutely no justification to collect information on 272.1 million internet users to track down an estimated 10,000 sleazeballs.  Just like registering everyone's guns will have no effect at all on violent criminals, but will surely facilitate abuse of the law-abiding.
Posted by Hecate at 12:25 PM No comments: