Because their intended victims will just take their guns away and use them against them.
Posted by Hecate at 5:30 PM No comments:

What I Hate About Spring 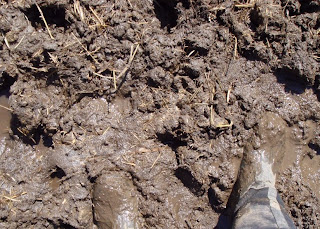 Okay, in my case it was "Order A Gun" Day. Does that count?

Yep, I finally decided how I wanted my Commander-sized Wilson Combat built.

The base model is their Elite Professional. 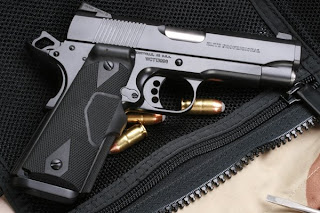 © 2007 Wilson's Gun Shop Inc.
I ordered it with a smooth, not stippled, Ed Brown bobtail, no magwell of course, single tactical safety instead of ambi, no Lasergrips, two sets of grips fitted to the bobtail with hex-head screws, tactical tritium sights, 3.5 lb. tuned match trigger (yeah, I know, but it's the same as the one I'm carrying now, and all I shoot any more is SA semi-auto's with really good triggers). It's all carbon steel, fully finished in allover-black ArmorTuff.

Now I get to wait impatiently for the phone to ring.

In about two months.

Education Is The Solution

Let me start out by saying I am beyond fanatical about gun safety. My choice to be armed carries with it an awesome responsibility. Any lapses of proper gun handling and safety control not only have the potential to destroy my life or that of somebody else, but also reflect on the character of every other gun owner in the country. When anyone with a gun screws up, we are all equally condemned by the media and in the court of public opinion.

So I make real damn sure I observe correct safety protocols at all times.

The late, great guru of the combat 1911, Col. Jeff Cooper, created four simple rules of gun safety that would, if followed without exception, prevent 100% of those tragic accidents involving firearms that end up on the news and cause politicians to yammer for still more gun laws.

These rules are: I was trained in the intolerant world of "There Is No Such Thing As An ACCIDENTAL DISCHARGE." There are only NEGLIGENT discharges, because any time a gun goes bang when it shouldn't have, the person holding it was negligent in some way. Either one or more of the Four Rules were broken, or the gun was mechanically defective, or the shooter did not understand the gun's manual of arms, which is - guess what? - also negligent.

(They also don't go out late at night by themselves and commit crimes without human involvement, but that's a subject for a whole 'nother rant.)

Teaching their kids about gun safety.

Can you tell this crap upsets me?

Thinking children (or teenagers, or anyone for that matter) will be safe around guns by ignoring gun safety is a deadly mistake. Even if you don't own guns, or even rank among those who really do believe they're evil talismans like Sauron's One Ring, you cannot guarantee your children will never encounter a gun outside of your home. Unfortunately, the Authorities who see education as the solution to everything else somehow don't extend this premise to guns.

"We teach children guns are bad." - Omaha Public Schools official spokesperson at a City Council public hearing on whether to allow concealed carry in Omaha in accordance with state law

These same gun-hating-and-fearing Authorities are horrified by the National Rifle Association's Eddie Eagle GunSafe© Program. This excellent program teaches children in pre-K through third grade four important steps to take if they find a gun:

This should be as much a part of every child's basic training as "the stove is hot" and "the knife is sharp." You don't eliminate the kitchen from your house, you teach your children how to behave in it.

You cannot kid-proof guns. You cannot kid-proof pretty much anything, because kids are smart, active, and curious. Kathy Jackson's superb website The Cornered Cat, outlines the very comprehensive method she's used to gun-proof her kids. That's how it works, folks.

And what if you're the adult your (or somebody else's) child comes to for help when s/he finds a gun, and you don't know what to do?

Kathy Jackson has excellent advice for that, too.
Posted by Hecate at 6:51 PM 2 comments: