And yet so far.

In the two most recent top dog shows, a Scottish Deerhound has won the Hound Group . . . but alas, not Best in Show. 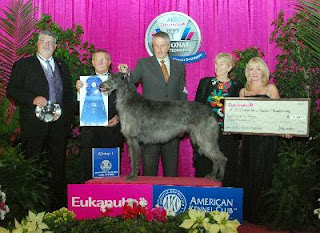 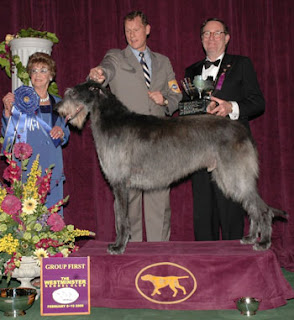 CH Gayleward's Tiger Woods
CH Chartwell Silver Run Vale Vu SC - CH Gayleward's Sullivan
Most folks have never heard of the Scottish Deerhound. Ranked 131st out of 156 in registrations in 2008, very few are born every year. Breeders tend to be very particular about who can have one of their precious puppies or adults.

I fell in love with the breed as a child, seeing them in the International Kennel Club of Chicago's benched show at the old McCormick Place. As an adult, I first started seriously looking for a Deerhound of my own in 1978, but it was twenty-five years before I finally had the pleasure of sharing my life with a member of the breed Sir Walter Scott called "the most perfect creature of heaven." 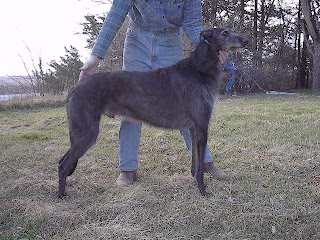 Ian Viktor Of Gladstone
CH Lyonhil Viktor - Dierscot Kilmore Kite
ETA -- Ian's sire was from Lyonhil, the oldest Scottish Deerhound kennel currently in operation in America. Kate Lyons has been well-respected in the breed for over fifty years. And if I'm not mistaken, a Lyonhil was the first American-bred BIS winning Deerhound.
Posted by Hecate at 9:47 AM

I was pulling for the Deerhound. His gait was beautiful, and that's what you want to see in a sighthound that big if only for the benefit of his joints as he ages.