You Bet Your Life?

"My neighbors will hear or see something and call for help."

"I don't have anything worth stealing anyway."

"I'm not a cute young teenager any more, so nobody would want to rape me."

"I don't drive a fancy car, so nobody would want to carjack me."

"I live in a safe area, so nothing bad will happen to me."

These are all real statements I've heard recently from women who don't want to take any responsibility for their personal safety.

Maybe that's an unfair assumption. Maybe they're genuinely afraid of self defense and its tools. But how can self defense be any scarier than the alternative?

Our police and elected officials tell us we shouldn't defend ourselves. We should let them take care of everything.

What they don't tell us is that they wrote the rules so they have no obligation to protect us from violence. And even if somebody does call for help, odds are it won't arrive in time to prevent anything.

Isn't that what we really want? To prevent a violent crime from being committed against us? I know I'd rather avoid becoming a victim/ crime statistic. If I can do that while conforming to the ADEE (Avoid, Disengage, Evade, Escape) model, so much the better. But if avoidance and evasion fail, I will transition into ACDC: Avoid, Close, Destroy, Cover.

Avoid the initial attack.
Close the distance.
Destroy the assailant's willingness to fight.
Cover the downed criminal, Cover any injuries, move to Cover if possible.

And the most effective method I have to destroy a violent criminal's willingness to fight is my gun. In an estimated 76% of defensive gun uses (some estimates go as high as 98%), no shot is ever even fired. The mere presence of the gun held by a determined defender is enough to stop the crime. 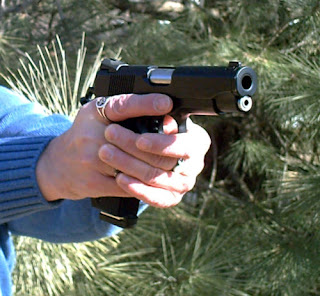 I tried it their way. When I lived in Chicago, I relied on other people to believe me/protect me/defend me. I ended up raped. I now know better than to bet my life that somebody, anybody else will save me from violence.

Sure wish I hadn't had to learn it the hard way.

Guns aren't for everyone. Not getting a gun is a perfectly valid choice in life. But what bothers me is the prevalence of denial that Bad Things Happen In The World. They do. Just watch the news.

They happen when the neighbors aren't there to hear or see, or when they are and choose to do nothing.

They happen regardless of how much the criminal can get for your stolen property.

They happen to people of all ages and appearances.

They happen no matter what kind of car you drive.

And they happen no matter where you live.

I fervently hope no more Bad Things happen to me. I've had my fill already, thank you very much. But if I'm unlucky enough to face violence again, I'll be ready.

No more betting my life on others for me.
Posted by Hecate at 9:04 PM

"I live in a safe area, so nothing bad will happen to me."

And yet what do you hear every single time something terrible happens in a "safe area?" You hear folks say "this sort of this doesn't happen around here. Yeah, it doesn't happen, it CAN'T happen, until it happens to you.

I can only hope those women see the light before their protective bubbles are shattered by the reality we live in.

You're spot on with this. I hope some of them learn from it.

And may I compliment you on a damn sexy gun?

For those who think their neighbors will call the police (or come to their defense), Google "Kitty Genovese" and you will find out that there is historic precedence for "doing nothing".

I applaud anyone's (ANYONE - man or woman, straight or gay, black, white, pink, or purple) desire to NOT BE A VICTIM!

You rock. And thank you for speaking out.

Excellent post. Reminds me when I was called by Gallup back during the election run up. The questioner asked if I was afraid to walk in my town after dark. I said 'No, because I would carry a gun." The pollster then said SHE would be scared to walk on my streets. Stupid woman. Totally clueless.

Actually, I might be scared in some situations...but I won't be defenseless.